Detroit, Nashville, and Atlanta on the schedule for this week 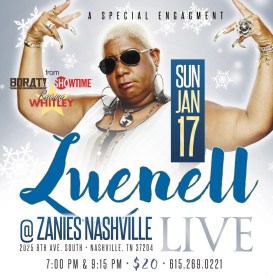 The Original Bad Girl of Comedy has been ON THE GRIND! Luenell rang in 2016 with the troops stationed in Qatar and has been hitting it hard ever since. Saturday night she does the MLK Comedy Jam with the hilarious Arnez J, and Karlous Miller at the Masonic Temple in Detroit.

The following night, Luenell is wheels up to “music city” for 2 big shows at Zanie’s Comedy Night Club in Nashville. This is a special engagement and Luenell’s Zanies debut, so come out and support!

Tickets for Saturday night’s MLK Comedy Jam in Detroit range from $35 to $95 and are available at Ticketmaster. Here’s the link.

Tickets for the Sunday night shows at Zanies are $20 with a 2 item minimum. Showtimes are 7pm and 9:15pm. To purchase tickets go here or call the box office at 615.269.0221. More show information below.

Luenell Coming to Atlanta
Luenell About Rock The Bay Area!