During these uncertain days of COVID-19 lockdown, Luenell has fired up her YouTube channel and has started streaming! Here’s episode one below, with some of her thoughts on being shut in for the last week. You know the drill! Comment, like and subscribe! 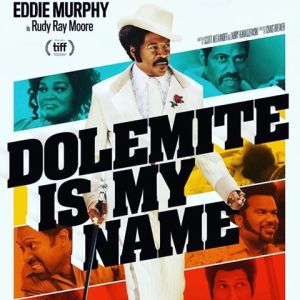 Netflix will deliver a history lesson Friday October 25th with Dolemite Is My Name, the original movie about the late comedian and actor Rudy Ray Moore. Dolemite Is My Name — directed by Craig Brewer and written by Scott Alexander and Larry Karaszewsk — tells the story of Moore’s hard-fought battle to get his film made.

Murphy stars as Moore, an aging, charismatic entertainer who never made it big, but is determined to change that. The film also stars Keegan-Michael Key, Wesley Snipes, Da’Vine Joy Randolph Mike Epps, Craig Robinson, Tituss Burgess, Snoop Dogg, T.I., and Chris Rock. See the trailer at the bottom of the post.

Luenell commented in this week’s LA Times that “Dolemite” and Moore’s subsequent films played to the rafters. “He was making them for everybody, but they resonated more with the black community,” she said. “They might have been a little corny, but hey, that’s all he had! And to see somebody beat the Man sometimes and win … it was goofy and entertaining.” 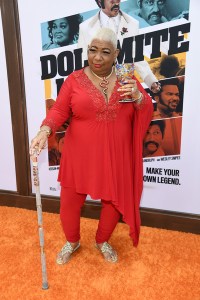 Luenell continued sharing a connection to the real Moore: A few years before his death, she worked alongside him performing comedy shows, getting to know him on the road.

“Rudy was already a legend in my mind when I got a chance to work with him,” she said. “When the opportunity came, I was like, ‘I get to do a show with Rudy Ray Moore?!’ He was already a little older, but he was still the icon everybody was falling over themselves trying to get a picture with him. That was back in the old Kodak photo days!”

They would sit together and she’d ask about his career, said Luenell, who kept vintage Dolemite merch Moore gifted to her. “He did what nobody could do. It’s like he says in the movie: If they close one door, I’ll go into another one. I don’t know if he’d ever had aspirations of being an actor, producer or director before he got doors slammed in his face, but I know that’s what he became.”

Set your recorders for ABC Monday night October 28th as Luenell is scheduled to appear on Jimmy Kimmel Live on ABC! 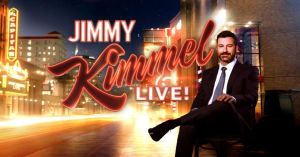 This will be Luenell’s first appearance on the late night talker, even though she’s been KILLING it at the Jimmy Kimmel Comedy Club EVERY Sunday night on the Linq Promenade in Vegas.

Luenell made it clear how excited she is about the opportunity to sit on the Kimmel set. “I can’t wait to meet Jimmy to tell him how incredibly thankful I am that of ALL the people in the world that he could’ve chose to give their first residency to at the club with HIS name on the marquee… that he chose me!” 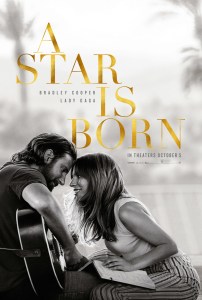 Hollywood is buzzing about the impending release of the Bradley Cooper helmed feature film “A Star Is Born” which is scheduled for October 5th release.

Bradley Cooper also wrote the screenplay with Will Fetters and Eric Roth. A remake of the 1937 film of the same name, it stars Cooper, Lady Gaga, Andrew Dice Clay, Dave Chappelle, and Sam Elliott, and our girl Luenell!

It marks the third remake of the original 1937 film, which was adapted into a 1954 musical and then remade as a 1976 rock musical with Barbra Streisand and Kris Kristofferson.

Apparently Cooper requested Luenell for the role. Luenell and Cooper had worked together previously in “All About Steve”. The film screened recently in Atlanta and Cooper mentioned Luenell when asked about working with comedians and how crazy talented they can be! We agree! Go see “A Star Is Born” when it comes out! 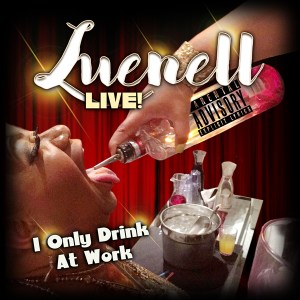 Luenell Live! – I Only Drink At Work

The Orginal Bad Girl of Comedy is BACK with a new LIVE comedy CD! Luenell Live! – I Only Drink At Work is Luenell’s hilarious new release on BJP Entertainment recorded live in 2018 at Stand Up Live! comedy club in Phoenix Arizona.

The album is currently available wherever music is streamed or downloaded including iTunes, Amazon, Spotify, Apple Music, Tidal, Google Play, Pandora and Shazam! You can download it on iTunes here .

Luenell Live! – I Only Drink At Work is a comedy tour-de-force where she “goes in” on college financial aid, segregated holidays, millennials, and coming to the end of her (sexual) career.

Add Luenell to your NSFW (not safe for work) comedy playlist, but don’t listen when you’re driving!